Mansplaining is the death of discourse: Polarization and the loss of nuance

Not a clickbait title or anything ™

The Overton window is the concept that there’s a widow of acceptable opinions/policies which are held by the mainstream of any given generation, but which moves on a generation-by-generation basis. Historically the window has some predictable patterns but no defined ones. It shifts both right and left, towards and away from things like liberalism, monarchism, authoritarianism, religion, capital punishment, and the lack thereof. etc. Although, notably, the window has shifted towards a reduction of punishment, an increase in personal freedom, and an increase in basic human rights since about 1450. Which by the way, not at all coincidentally aligns with the introduction of the printing press and access to literature.

What is seen as anathema to one generation or location population is seen as perfectly acceptable to another. E.g., in the 1820s, the UK was largely secular, and its scientific communities quite often did not believe in a god, today the same cannot always be said.

But anyway, the Overton window, perspectives and ideas tend to shift to fall into a range of the norm for a specific population. People want to be accepted, so even radical ideas are muted. We shift, invariably towards a muddy center in which no one is right, but no one is wrong either. We’re inherently centrist at heart because group think means compromise and pleasing the crowd. And well, “we” are a crowd. 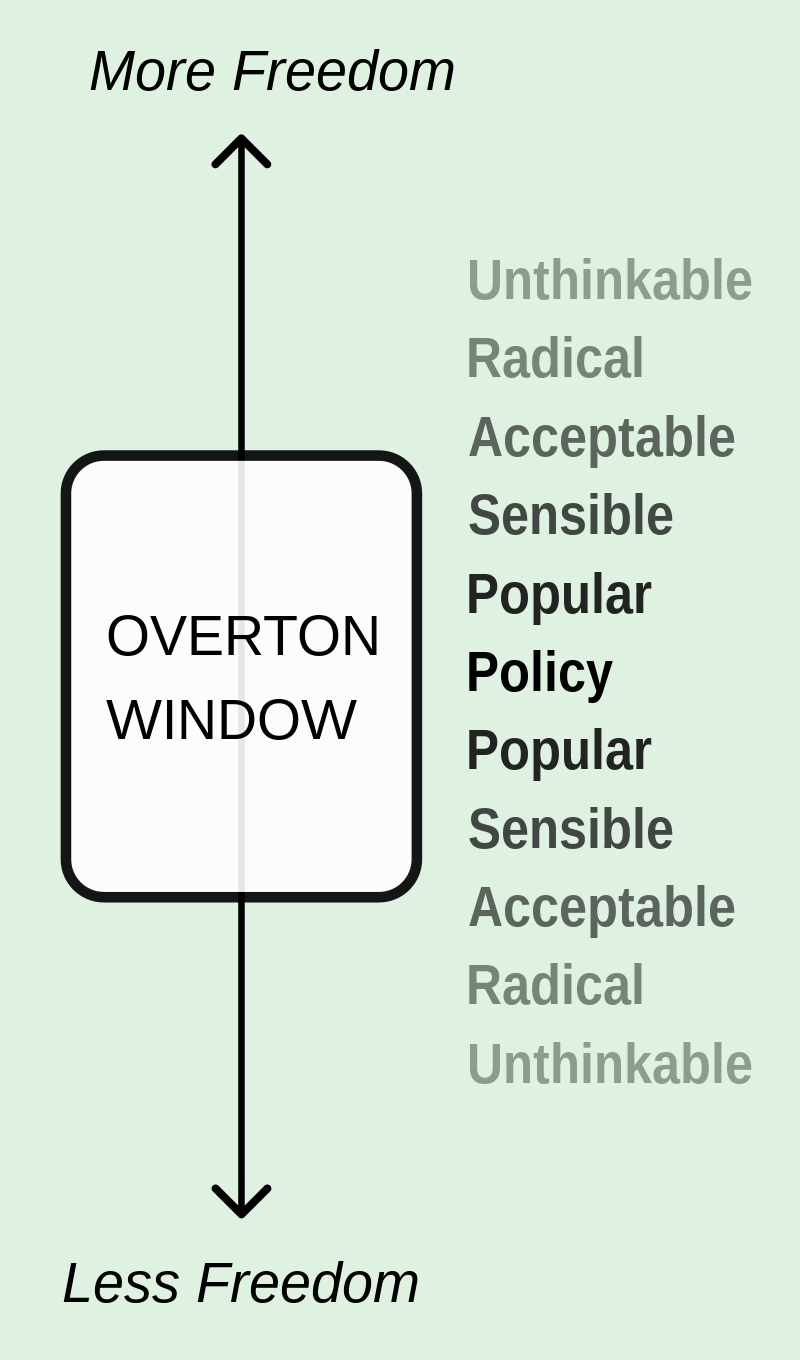 It’s just how humans work. You can’t get around it.

So, if the maxim of being a good citizen is to fit in and do your part to contributing to a homogenous and harmonious whole, what’s the worst thing you can be? That’s right, radical.

Which is why, especially in the USA, a lot of language exists not around taking down an argument and exposing it for, say, farcical drivel suitable only as a sad excuse for toilet paper but rather to dismiss the idea on the grounds that it is radical. People actually get offended at being called radical as well. E.g., when I tried to have a discussion with an acquaintance of mine about militant veganism, she was offended about the usage of militant, despite this term meaning, “one who takes action for their beliefs – e.g.,a compliment”. And you get a lot of words that are clearly just intended to state that someone holds a certain set of beliefs, but which are read as insults:

Of course, the left engages in the same sort of discourse, and it is the example of the left I will actually use to make my point. In this case, that very silly little compound, “mansplaining”. Note, I wrote this on my phone and had a good fight with autocorrect which wanted the also interesting but altogether different topic of manslaughter.

So, mansplaining. Chances are, if you’re female you shrug and think of all the times a random man has helpfully walked up to you doing a thing and given you super basic newbie advice; “I see you typing in Microsoft office ma’am but did you know if you hit the floppy disk icon at the top you can save it to your hard drive? Your hard drive is that thing on your computer you save data to and …”

If you’re a man though, or even male passing, that’s likely not the image you get at all. Instead, you’re more likely to have imagery of being hurt. Of people rejecting well-meaning advice. Of people not giving you a chance to be the useful, wonderful human being you want to be. Of people using a word to silence you by means of attacking your right to speak up at all. Even when you’re not explaining something super basic without first asking if the human in question knows it or not. This is a word that is used to shut you up when people don’t want to bother evaluating what you have to say or your right to be there. And unfortunately, that’s often a fair perception. Many people do use mansplaining in this fashion.

You see, once you’ve established that a word means, “you are radically imposing on my right to be an intellectual by being a man at me” it’s fair game to use it to say, “your behavior falls outside the socially accepted norm”. It’s fair game to mean, ” I don’t have to bother with your argument, and I will demean you to achieve that dismissal”

That is, of course, utter nonsense. If you don’t want to engage with an argument, you just don’t have to. Unless you’re in politics, no one is paying you to engage with the opposition and be right or have an opinion. And if you are on the internet, you could even just block them, and the problem vanishes.

But these sorts of tactics do an interesting thing to language. The word has two completely different meanings on opposite ends of the scale. For example, I know that in any case where I use the word mansplaining and people agree with me, I am preaching to the choir, knocking down an open door, blowing a trumpet in my own little echo chamber of anti-patriarchal ideals. And sometimes that’s okay, sometimes I just want/like/need to be agreed with. The thing is, most of the time when I bother to talk, I want to be listened to rather than applauded, I want a discourse, not an audience (obnoxiously and paradoxically that is not how blogs work at all) and that means choosing language that can be interpreted in the ways I want. Now, obviously that often fails, language is a fragile means of communication dependent on the other person’s inferences, beliefs, and pragmatism. But if I say, “you’re mansplaining this to me,” at a random man in a random conversation, I know with certainty that he likely hears, “you are not respected in this conversation, shut up” rather than any variation of “excuse me good sir, you are explaining how to tie my shoes which I learned when I was three, I value you as a human being but please try to contribute in some other fashion” which I might intend.

Mansplaining therefore becomes useless for discourse because it is polarizing, so people react to it without thinking, with bias, without having discussions around it. They feel an emotion and clap, cheer, flush in guilt or shame, or pose angry rebuttals none of which are the point. They become reactionary. And that quickly becomes sad, difficult, and even dangerous.

Polarization occurs when we demonize the opposition rather than looking for nuance, mutual ground, and discussion. Of course, these things aren’t always warranted. No tolerance policies on racism, xenophobia, homophobia, nationalism, and other ideologies which harm others (Looks sternly at capitalism) can only be to the benefit of the social group, it should be implicit in the social contract that we reject ideologies of this nature.

But when we resort to it for everyday politics. When we foster and build division as a means of winning, we’re directly harming the ability of others to have rational and meaningful discussions using those words.

We foster reactionism in response to deeply complex and nuanced discussions. And sometimes nuance is over-rated. Sometimes when we use phrases that have no nuance, we want to say, “This is enough that I feel safe using a blanket statement”. But, more often, polarization results in harmful rhetoric in which people are unable and unwilling to change their minds. They hear an argument to their stance and they shut down without considering the rational aspects of the argument. And, believe it or not, emotions are part of a rational approach to an argument. You cannot isolate the little voice in your head and tell it to think without ever once considering emotion because that’s not how the human brain works. People settle on morals based on what makes them feel bad. People decide on beliefs based on what makes them feel like good, worthy, valuable, valued human beings. Your rationalization is at least partially based on emotions – which is a reason why bias is so dangerous.

What do I mean here? In 2020 in the United States, House Speaker Nancy Pelosi publicly ripped up President Trump’s State of the Union Speech. This is a radical and polarizing act that says nothing but “I find whatever you stand for to be meaningless and possibly even harmful, I do not care”. The result, people clapped and cheered or people pretty much called for her to be hung. Of course, those voices of radicalism are the loudest, but few people were visible saying “this seems like a publicity stunt and well below the level of behavior that we should expect or accept from our politicians”. The heavily polarized nature of that particular government allowed an action which should have been seen as childish and immature of a sitting politician to be met with nothing but emotional reaction to her actions.

And that sort of polarization extends to many, many other things.

Take aspartame. A relatively harmless alternative to sugar, swept with a vicious smear campaign to discredit it — which was so successful that many Americans refer to it as “gut rot”

Take nuclear energy, which has perfectly valid arguments against it like the fact that Generation 4 plants normally operate at an efficiency of about 33-40% (comparable with fossil fuels) but which is frequently left out of discussion because people get hung up on bias.

Or the word “feminism” which means ” to elevate men and women to equal status” but which, thanks to smear campaigns and the imperfect nature of the human race (yes feminists qualify) has come to be associated with “pussy power” and refusing to shave one’s armpits (of which the only thing with either is polarization and failing to see or use nuance) to the point where any discussion about feminism as something like ” perhaps men also deserve access to safe and temporary birth control other than condoms”, one has to wade through a small mountain of misconceptions and bias — to the point where it is faster and easier to leave the word out and the same people who disagree with my argument pitched as feminism often agree with it pitched as a generic idea.

So, polarization limits the value of words because it (sometimes) nullifies people’s ability to approach the usage of that word as a base fact rather than by first unpacking whatever baggage of bias and previously stored perceptions they might have.

And that’s really quite sad because I don’t want to have to police my language to make it bias free. In fact, I can’t. The only thing I can do is try to be aware of the bias attached to words and when and how words are polarized. I can try to be mindful of when I use words that have been weaponized against others or against ideas. I can try to be mindful of when I respond to a word not because of the intent of the word but because of how I’ve learned to interpret it. And that’s all I can do, that’s all any of us can do. Language is, after all, a fickle means of communication, open to subjective interpretation and the ability to put yourself in the shoes of the other person to determine what they mean.